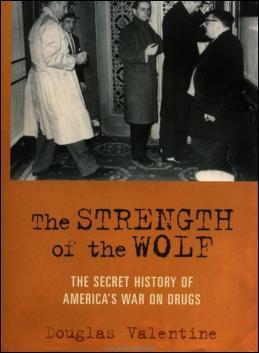 Please click here to buy The Strength of the Wolf

The Strength of the Wolf: The Secret History of America's War on Drugs

This fascinating and engrossing account of early US efforts to control the illegal drug trade is also much more. Valentine deeply examines the practices of the CIA, carefully and skillfully making a connection between it and the Federal Bureau of Narcotics (FBN). The book exposes the close relationship between organized crime and those in intelligence. From the Cold War to the 1960s, FBN director Harry Anslinger, in a desperate bid to outflank the FBI, entered into a "suicidal" relationship with the CIA. In 1962, the FBN began "its descent into knave spookery and internecine warfare." Valentine also smartly examines the CIA's role in using drugs as a weapon to turn foreign agents and supply funds to anti-communist organizations. His account of MKULTRA--the CIA experiment with LSD--is fascinating and nicely documented. Exploring the deep politics defined by Peter Dale Scott (Deep Politics and the Death of JFK, CH, Mar. '94), Valentine deftly plumbs the hidden roots of the early war on narcotics and proves that foreign policy considerations always trumped public health. The author also makes some fascinating connections between the triumvirate of the FBI, CIA, and FBN around the time of President John F. Kennedy's assassination. Summing Up: Outstanding. All levels/libraries. --- D. R. Turner, Davis and Elkins College